Today is the time, that not only freak himself or Fred are posting stuff in the PureBasic Team Blog.

So here it is: http://www.purearea.net/pb/english/indexitvw3.htm 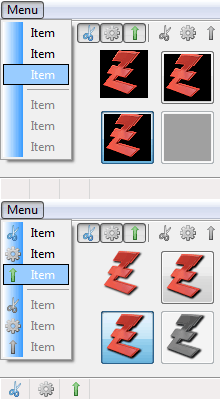 This one is for all those who are quick to complain when a new feature is added that they themselves don’t need. As it turns out, sometimes changes made in areas you may not care about at all can trigger changes in places that you may find useful after all. One of these areas is the IDE.

It all started very small and insignificant: Inspired by the recently reanimated thread here, i decided to add the ability to easily switch out the IDE provided icon set for a custom icon theme. How hard could this be? It was a rather small thing really, and quite quickly implemented in the IDE code. Here is where you would say: “Why do i need themes? Better focus on something else!”, well better read on…

Of course i had to test this, and for that purpose i created a theme with the Silk icons also mentioned in that thread (the result is quite nice btw, and will be included in the PB package). They use a lot of semi-transparency and converting them to icons (non 32bit, for older Windows versions) just didn’t look good. So i tried loading and using the png files directly. Well ups, the PB ImageMenu doesn’t support the alpha-channel. In fact, it doesn’t even support non-icon images at all. So i’ll just change the drawing code to support alpha-channel images, how hard could this be?

Those who know me a little closer know that i tend to think way too far ahead with these kinds of things. What good is alpha-channel support in the menu when not even the ImageGadget can properly display alpha-channel images? So lets just add it there as well, and then there is the ButtonImageGadget too. Seriously, how hard could this be? 🙂 (turns out this one was actually a tough one. The nice solution i had worked up for Vista/XP just didn’t want to work on the older Windows versions) 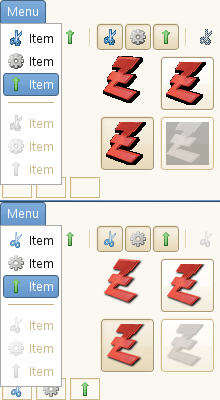 The line doesn’t end there though. There is also the Linux version. The Image lib on Linux didn’t support the full alpha-channel so far, it only supported full transparent pixels through a 1-bit mask. And there i am, right back at the beginning with a set of ugly looking icons in the menu. So, lets just add the full alpha-channel to the Linux Image lib. How hard… well, this really is a bigger deal. It means a rewrite of the entire lib, plus large parts of the 2DDrawing lib and every other command that deals with images. We had this one on our list for quite a while already though because the lib still uses a GdkPixmap to represent an image and not a GdkPixbuf which is the much better choice. So i went ahead and rewrote these commands as well, and it was worth it. The lib can now use the full alpha-channel and since the Gtk widgets all bring support for GdkPixbu’s, every Gadget that deals with images can use it too. (for example ListIcon, Tree etc). Oh and while i was at it, i dived a bit into SDL and implemented DrawAlphaImage() for Linux too. 🙂

This brings a new “problem”. With Linux supporting the alpha-channel in every GUI element, the Windows version is lacking behind again because it still requires Icon files for some GUI things. That cannot stand! XP and Vista actually solve this quite well with their 32bit icon support so this wasn’t so hard to do. Older versions however don’t support that, so to get the best possible result an alpha-channel image is converted to an icon with a mask to get at least some transparency. You can now pass non-icon images to all functions that take an Image on Windows too and it will be converted to an icon as needed.

For once, the Mac version was the easy target in all this because it already came with full alpha-channel support from the start. It only lacked the ImageMenu, but i added that as well.

So, with v4.40 you will be able to use alpha-channel images for all GUI elements and it will look good on all OS. No more converting to ico to get transparency on Windows! If you plan to target Windows versions older than XP, you might want to avoid semi-transparent pixels though for things like toolbars so it will look good also without the 32bit icon support. If you plan to target Windows 95 or NT4, you are out of luck as they don’t have alpha-channel support at all. 😛

Not so useless after all, eh?