Developed or developing a new product in PureBasic? Tell the world about it.
Post Reply

I have had the time to finish one of my old projects: Install Studio. As the name suggests it is an application to build install packages.

Some history:
Back in 2003 I was preparing to publish an educational software I had been working on for a year. As I planned to publish it on CD I needed to create an installer of some kind. I looked around the internet but most of them were very expensive and I didn’t have the time to learn some new scripting language. So I decided to create my own installer. It wasn’t difficult and it worked perfectly. There was only one problem: everything was hardcoded inside the source. So I was unable to use it for other software without rewriting the code.
Later I started working on a new version. Again everything was hardcoded inside the source but I managed the create a block were one could easily change the colour and the size of the window. Not a very usable piece of software.
So in 2005 I started working on brand new version where the user can change everything and add files using an editor. I took me one month and so Cougar Install System (The old name of Install Studio) was born. It worked as I wanted it to work, but it wasn’t perfect.
In 2010 I started working on a new, enhanced version of my software. I added many new features, changed some parts of the editor window, updated the source code using the latest version of PureBasic, etc. And then things changed in my life and I put the whole project on hold…
Until two years ago, when I started working on it again. A changed the help system, as well as the language system, updated to source and renamed it to Install Studio. It is still not perfect, but I decided it is time to release it. (Actually I have been using it to distribute my own games and software for years.)

I would really appreciate any bug report or suggestion, because I am sure you will find problems. I will continue working on the code as I know where it could be improved.

Here is a screenshot: 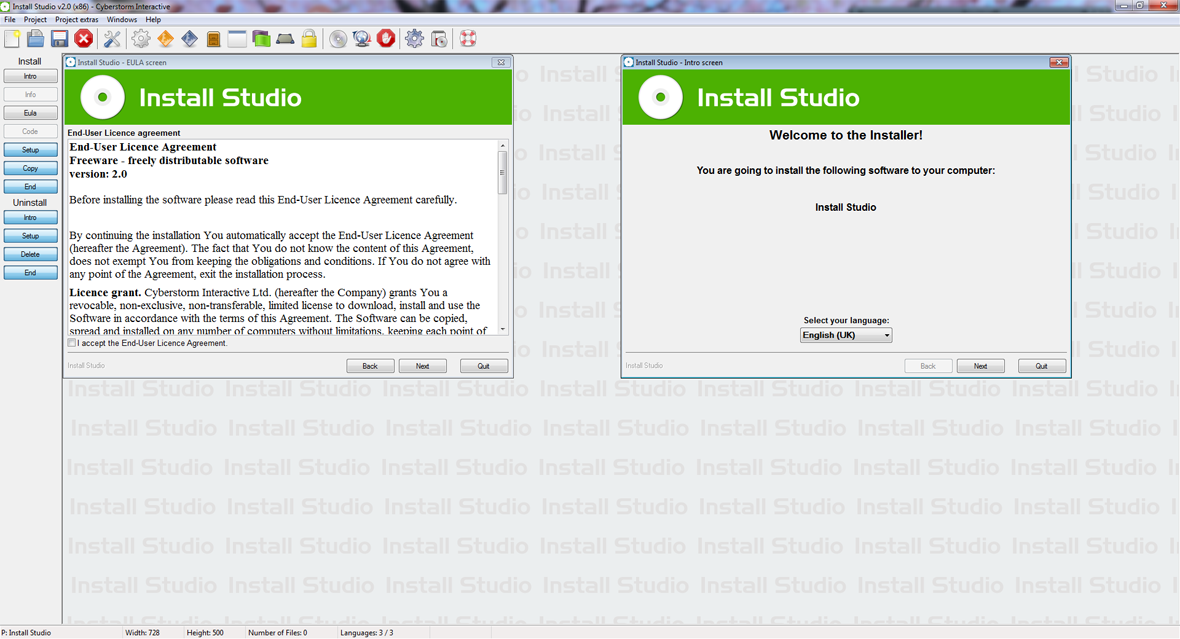 I hope you will find it useful.

I have uploaded the first update of Install Studio, version 2.0.1. Here is the changelog:
Changed: Bug fixes: Removed: You can download the new version using the link above.

Looks good, will give this a try and post results later. Thanks for sharing

Tried this out last night and I like it. The interface is different than any other install maker I've used, but it somehow made more sense to me. Anyways, keep up the great work and again, thanks for sharing.
Top

Thanks for trying it. I am also glad you liked it.
I plan to release an update in a few days. I want to remove the registration window.

I do get an error every time that it cannot create the uninstaller for some reason...here's the log file contents with the name and e-mail removed:

I need to do some further investigation but it might be some access violation problem.
Could you please check if there is a file called uncougar.tmp in your Temp directory?
From the log file it seems that the file is created but the program cannot access it.

Thank you for your help.

The file should be there even after exiting Install Studio as it does not delete the file.

Here is how it works:

When building the install package, if the user wants Install Studio to create an uninstaller, a new file is created in the temp folder. The location of this folder is given by the GetTemporaryDirectory() function of PB. In my case it is: C:\Users\neuronic\AppData\Local\Temp\ . So on your system it should be C:\Users\Zax\AppData\Local\Temp. Install Studio creates a new file here, using the CreateFile() function, with the filename: uncougar.tmp. If the file is created successfully, Install Studio writes data into this file, closes it and saves it into the install package. Now, the log entries: Creating UNINSTALLER…, Uninstall environment variables … and Saving Uninstaller language settings ... only appear if the file is created successfully. So the file should exist.

The ERROR! Unable to create the Uninstaller! log entry may appear because of two reasons: the file could not be created or the image, if there is an image to be used, could not be encoded and saved into the file.

I use Windows 7. Maybe if you run Windows 10, its security settings or an anti-virus application stops Install Studio from creating the file.

I will try to run Install Studio on Windows 10 next week.

Again, thank you for your help.

I right clicked and ran as admin, this time the temp file was created in the proper place, but it still has the same error that it was unable to create the uninstaller. I've tried all three installer types with the same results as well just as a FYI.
It is Windows 10 Pro - x64, no antivirus other than the built in Windows 10 Security, no firewall enabled. If you need any more info, just let me know.
Top

I managed to test Install Studio on a Windows 10 machine and it seems that the problem has nothing to do with any security setting.
It seems that the problem occurs if there is no image used in the install package. If you try to build a package with an image, it should work. So I will locate the problem, correct the code and after further testing I will upload a new version soon.

Thanks again for your help.

I just tried with an image and you are correct, it built successfully. Small suggestion, on the "Build Setup" screen, after the build has completed, the 'Cancel' button should probably change to 'Finish' or something. Really only cosmetic...
Top

Update 01, version 2.0.1 has been uploaded. See first post for details.

I wanted to make a suggestion for the license agreement. Many installers provide a button to "print" this document (with formatting). For my installers I found the easiest way was to display the contents as WebGadget and invoke the print dialog on this action. This both preserves any fonts and automatically handles the layout as necessary according the user's paper size.
Top

Thanks for the idea Mistrel. I will add a Print button as soon as I have some time.

Just checking out your Install builder: